skip to main | skip to sidebar

3 6"x6" oils on panels
I'm not sure what to make of this. I applied what I thought was thick paint only to see it dry in front of my eyes in different spots. Hit some more paint and no change. A few spots stay dark. It is out of my control at this point. My studio is about 90 degrees. I've seen similar things in the past but this is unusual. Oil paint is dry to the touch in half an hour. I'm using a water based white only because that's all I have right now. The darks have no white in them and they dried the quickest. In fact, they dried lighter than when mixed. Jeez, I've been doing this a long time now and don't know what to think. I'm curious to see what happens when completely dry. Might need to varnish for uniform look. Off to the Orchard Lake fine art show in Michigan tomorrow. Cheers
Posted by brian eppley at 5:10 PM 0 comments

back in the clouds 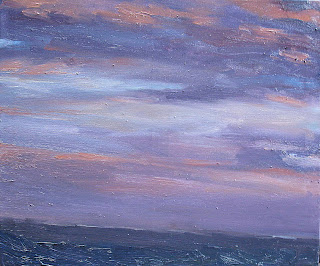 20"x24" oil/ canvas
So, I guess my head is back in the clouds. Driving home from Madison a few weeks ago at sunset the sky became incredible. The storms we had at teardown blew through and left these great sky scenes. Liz was shooting photos left and right. Actually west was best. Lightning was flashing east, still, but west was out of it.
This foreground is reading blue....like water...it's not in reality. But I like it just the same.
Last weekend on Long beach island was shall we say.............brutal. I'd like to write an analogy but not sure I can. Ok, imagine this. 150 people in tents. 150 people in tents wiping sweat from their brows continually from 10 am till they had finally had enough. 75 people in tents around 1pm wiping sweat from all body parts watching maybe 10 patrons. Oops, not patrons.... just more exhibitors heading for ac or their hotels. Or both. Show promoter attempts to limp through the remaining survivors/ exhibitors and say it's ok to zip up and call it a day. At least that's what I think she said. Delirium was close. And I don't mean the Belgian beer although I wish it was. Dropped a weight on my big toe zipping up. Kiss that nail goodbye.
Day 2. Who really cares? You get the point. ...Well I should mention the wicked storm that rolled in at tear down. Fortunately, I felt it coming and tore down early. No more than slammed the van door shut and Hell broke loose. Yes my friends.............It was Hell..............
Posted by brian eppley at 4:40 PM 4 comments 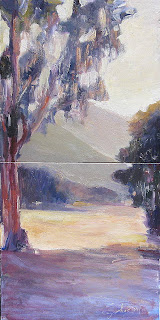 48"x24" oil/canvas
I hesitate to post this but am anyway. As usual I like the first piece more and completely dislike trying to capture anything more than once. The first one was photo'd with artificial light and appears more yellow than it is. This one is in natural light.
The goal was to intentionally place masses on edge of canvas and through the use of angles and distance keep the eye bouncing around the center of the canvas, forgetting about the side masses. While maintaining atmosphere. Frankly I'm tired of the piece and don't know if it worked or not. I even went back over it with some thin layers. Something I never do these days. I have to ask myself why would I even attempt this, let alone make it a piece I attempt to do large scale. Well, I'll have 2 days to ponder it while I sit in the blazing heat that is the Long Beach festival of the arts. Forecasted heat index of 109 degrees with high humidity both days. Here we go again. It just keeps getting hotter. Oh yeah, they put my cronkite boat painting on the advertising card for the show. Hope it helps. That's assuming the patrons don't die from heat stroke!
Posted by brian eppley at 6:26 AM 2 comments 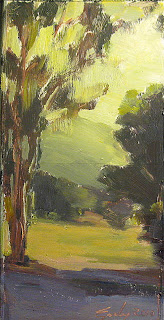 12"x6" diptych
So I'm back from Westport and tackling a new subject. I'm working on breaking the -Don't put masses too close to the edge of the canvas- theory. Also, I'm going to attempt a seriously high light key. This is the initial breakdown. The landscape is California again. By the time I'm done with the subject the viewer should smell the eucalyptis and feel like they're being dressed in sunlight. A tall challenge but that's what I'm chasing.
ps. I realize that the composition law could be unbreakable. I'm still consiberably tired. Will try anyway.
Posted by brian eppley at 6:19 PM 4 comments 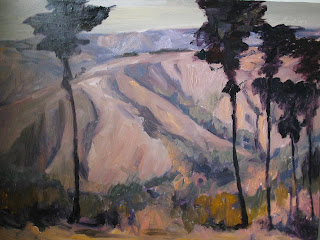 30"x40" oil/canvas
Made progress with this subject finally. I mixed an absurd amount of paint but at least I didn't run out! This piece has a nice surface variety in person. I am happy with this one. The last one lacks textural interest. Off to Westport Connecticut.
Posted by brian eppley at 6:36 AM 0 comments 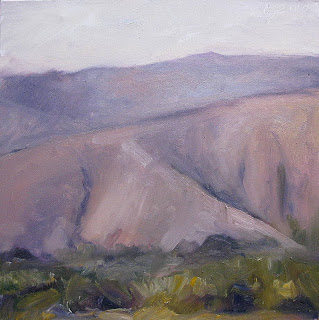 24"x24" oil/canvas
Ok. I'm at a tough point. I can't gauge the work that I'm doing. The schedule is probably to blame. While painting I am still completely focused. The instant I stop, the schedule is my main focus. I'm excited about some of the upcoming shows but I've learned it's not beneficial to be excited....leads to dissapointment. My paint appears to be thinning as I feel rushed, yet I feel I must continue painting. In a way, it's self therapy. Learning ones own reaction to circumstance can only be helpful. So bare with me as I continue to stretch my faculties and see what the outcome will be. This has happened before and I've put work away only to realize later that it wasn't horrible after all. Or at least salvageable............Off to Westport CT. this weekend. They were kind enough to feature me in the show advertisement so I want to live up to expectations. I will paint again before leaving and will post the piece no matter what the outcome is! Cheers
Posted by brian eppley at 5:27 PM 2 comments 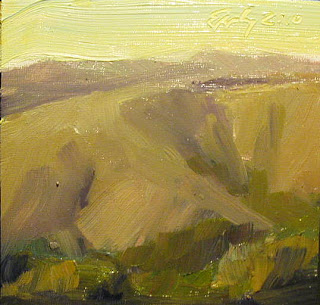 6"x6" oil
This is what I do when I'm worn out. A quick light sketch. Just got in from Madison Wisconsin...took the van to the garage... picked the van up... bad water pump....ordered frames... ate food finally....my palette has a ton of color mixed yet this piece looks very minimal. I'm preparing a big painting from the east view of the mountains around big sur. The mountains are classic California. They look like pillows to me. So inviting..............and I'm quite tired.
Posted by brian eppley at 5:41 PM 1 comments 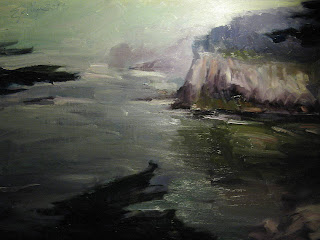 30"x40" oil
Pardon the poor picture quality. I've sat roasting in the Hamptons for 3 days trying to sell my work. It was in the 90s. Got home to Harrisburg..... it's over 100 degrees f. My studio is about the same. I picked this scene from our trips to California. It might need tweaking... I'm off to Madison WI. tomorrow. I remember the cool air around pebble beach. Trying to recapture it...........
Posted by brian eppley at 6:53 PM 4 comments

check out a brief video of my painting process

brian eppley
Harrisburg, Pa., United States
I am an oil painter. I paint mostly from direct observation both indoors and out. I studied at the Art Students League Manhattan under Daniel Dickerson. In my work I strive to maintain a balance between abstraction and representation all the while keeping atmosphere most important. View my show schedule to see where I'll be exhibiting.